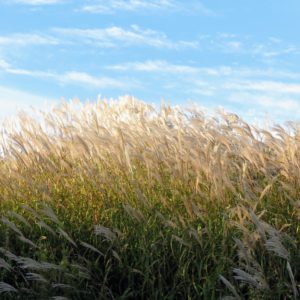 Along a local county road there are patches of this beautiful grass. It looks like normal field grass until it is full grown. At which time it grows these wispy, shiny white flowers on the top. This beautiful grass is called Maiden grass. On the surface it looks like completely ordinary grass, but upon a closer look at its root system, we learn it is indeed very different. This difference plays out in ways that directly impact the quality and length of this species life.

Ordinary grass grows directly out of its own individual root. It’s own root sustains itself and lives or dies on that root alone. While the roots of nearby seeds are close together, they do not work together, or support each other. The root depth is very shallow making it susceptible to damage during drought, or the winds of storms. The roots simply don’t reach deep enough to reach water that is not superficial, or to hold it’s weight during strong winds.

Maiden grass grows out of a rhizome. We are actually familiar with a number of rhizomes used in cooking; for example ginger and turmeric. In a rhizome there is a base to the plant. This base sends out roots that grows perpendicular to the force of gravity creating a stabilizing force for the plant to allow new shoots to grow upward. The base itself grows thick and deep into the soil creating a three pronged root system. The plant’s ability to stabilize itself, gives it a decided advantage over ordinary grass. It is heartier, steadfast, and can withstand much greater trial than ordinary grass. Maiden grass can grow taller and fuller than ordinary grass. It can withstand longer droughts, stronger storms, and produce multiple shoots from a single rhizome. The entire system is stronger than ordinary grass.

Through a number of cumulative life circumstances our family found itself church hopping in the last few years. We have landed now, but our search taught us a lot about the institution of the church. We found there to be, basically, two types of Christians. Ordinary Grass Christians, and Maiden Grass Christians. On any given Sunday the two seemed the same, but when the winds blew, and the drought came it became obvious who would be bearing seeds at the end of the season and who wouldn’t.

Ordinary Grass Christians came across as::

– Involved in the basic functions of the church.

-Always willing to help and engage socially in the life of the church.

-Discussions about a relationship with Christ usually return blank stares and uncomfortable silence.

-Basic factual knowledge of God and the gospel.

-Little to no personal connection between scripture and daily life.

-View church as an opportunity to see friends and family, be part of the community and do something good for the world.

Maiden Grass Christians came across as:

-Involved in the basic functions of the church.

-Always willing to help and engage socially in the life of the church.

-Eager to discuss their current relationship with Christ no matter what season they are in.

-Studies the Word and application to personal life.

-Personal connection to the gospel and their self worth.

-View church as an opportunity to express their praise for Christ, learn more about and draw closer to their Savior, and engage with other believers that will strengthen and deepen their connection to God.

On the surface, we all appear the same, after all, we are all doing the same things on a Sunday morning. We are all genuinely nice Christian people, singing, praying, fellowshipping together. We all care about one another within our community. But Maiden Grass Christians have something others don’t. A stable root system.

~Maiden Grass Christians stem from a rhizome of Christ himself. ~

They have allowed Christ to dig deep roots in their heart to stabilize them. Christ himself remains steadfast for them to grow out of himself as a more stable, stronger and more durable Christian. Their entire existence is made by, sustained by, and lived for Christ.

While Ordinary Grass Christians appear similar, their root system can’t withstand the same rigor. It is only there to support itself. This is not to say they are selfish, simply that they sustain themselves individually, through their own work and their own merit. Stumbling blocks in their faith life threaten to destroy it, and often do. Personal conflict with fellow church members severs their connection to God because that’s all the further their roots went. Institutional church corruption keeps them from knowing God’s presence because their leadership was their only window into observing God’s presence and work in their life. Trials of humanity and personal afflictions plant seeds of bitterness towards God because their roots aren’t stable enough to fuel their strength until the trial is over. Superficially we are the same. We call the same Lord, Lord. But the Maiden Grass Christian is the only one that can weather the trials of a believer’s life.

~We cannot afford to be Ordinary Grass Christians. ~

We were made for more than that. Our seeds cannot spread and our flowers cannot grow if our roots won’t last the difficult seasons. Our churches cannot survive on Ordinary Grass Christians alone. They will be torn apart at the first sign of conflict, which is bound to happen because we are all sinful humans colliding with each other every week. Our relationships with other Christians will not last to maturity because our personal conflict will threaten the relationships. We will not be able to withstand the personal trials and evils we face because we won’t have the strength of God to endure it for us. We simply cannot afford to be ordinary. That is not what we are called to be. We are called to be sustained and stabilized by Christ alone. Filled with him as our source of all vital needs. He must be our root system or we don’t stand a chance.

Verse 1: “The branches are all those that claim to be followers of Christ. The fruitful branches are true believers who by their living union with Christ produce much fruit. But those who become unproductive-those who turn back from following Christ after making a superficial commitment-will be separated from the vine.” An excerpt from the the commentary in the Life Application Study Bible. This can come across harsh on the surface, but in reality is is simply the natural order of gardening. I am constantly plucking off dead leave and branches from my plants to keep them alive and healthy. The pieces are already dead. I didn’t cause them to die. They simply stopped being useful to the plant. Someone that is superficially committed to Christ is already unfruitful. They are already a dead branch and of no use to the vine.  God doesn’t cause someone to be unfruitful. Nor does he turn against them to cause them to turn from him. That is their decision. He simply doesn’t use something that isn’t useful.

Verse 2: This illuminates the two different types of pruning. If a Maiden Grass Christian gets pruned, they become even more fruitful. If an Ordinary Grass Christian gets pruned, they simply don’t grow anymore, because they were never fully alive in Christ to begin with. Pruning comes in many forms, but mainly in the trials of a life as a believer. Trials throughout the Bible consistently signify an opportunity for greater maturity, and growth in our personal walk with the Lord. Pruning is not a test, it is an opportunity to know how deep our faith really is.

Verse 4: We are already in Christ. We were created in his image. His life has always sustained ours even when we didn’t ask for it. We simply need to stay there. It doesn’t say “go to him” or “do this, this and this, and then he will sustain you.” it simply says remain in him. We are already there. Just stay, and be fed.