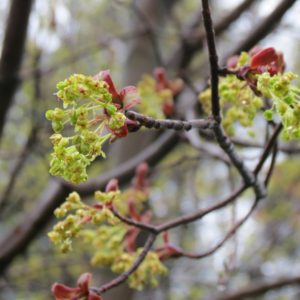 Earlier this spring our Red Maple popped out its pollination and leaves. After 4 long months of winter chill the leaves are set free to pollinate, seed and collect sunlight once again. The time between the dormant branch and the burst of leaves seems so short. In just 24 hours on one sunny day these leaves push through. This particular day requires great effort on the tree’s part. Especially after 4 long months of living off its own stores of nutrients. Not to mention this particular maple is a seasonally early bloomer. It bursts forth this energy when very little else is blooming, and very little of the ground is thawed and thriving.

The leaves will go on to other tasks and purposes, but the pollinators have one job and one job only: to further the existence of this species of tree. Its job is short but vitally important to even our own existence. Pollinators such as bees, bats, birds, butterflies and small mammals are responsible for bringing us one out of every three bites of food, in addition to the clean air we breath. Without pollen or pollinators, our own existence would be in jeopardy. The little bud that burst out these leaves and stamens did so after months of no movement. Expended great energy over a short period of time to fulfill its one great purpose.

One verse comes to mind.

~“Perhaps this is the moment
for which you have been created.”
Esther 4:14~

Have you ever had a moment that you just knew was orchestrated by God? He orchestrates every moment, but surely there are times we are more aware of his hand than others. He comes in small ways and large ones as well.

A few years ago I bolted upright in the middle of the night, my heart pounding, my mind racing with one single thought. “Jason, Jason, I have to call Jason.” (name changed for privacy). Such an absurd thought in the middle of the night! 1) I was not the type of person to just call people in the middle of the night. I had young children, sleep was vitally important. 2) This was not a particularly close friend of mine. Someone I knew and cared for surely, but definitely not someone that would expect a call from me at such an hour. Why on earth would a rational person pick up the phone and make that call? My heart continued to pound and my mind continued to race with that one single thought until I indeed picked up the phone. On the other line, Jason was talking a friend out of suicide. Having little experience in this area, he needed a detached voice on the other side to confirm the choices he was making and get is friend the help required. As I hung up the phone, the Esther verse flitted through my mind. What if I hadn’t picked up the phone? What if I ignored the clarity in which the Lord was pushing me and let realism dominate my rational thoughts? I don’t know what would’ve happened, but I do know God used his disciples that night to save a life worth living. To give another life their Esther moments, and give that life another opportunity to know Him.

Esther is truly an incredible story. A Jew elevated to queen in a kingdom full of revenge, deceit, and greed. God used the most lowly, unnoticed character to save an entire generation of Jews. Her life was plagued with confusion, missteps, betrayal, seemingly divine error to be where she had been planted. Only to find out she was the only one that was in a position to save her people. Like the tree, she waited long dormant seasons for her moment to do exactly what God put her on this earth to do. She undoubtedly lived an entire life devoted to God’s hand in her life full of many of her own God moments like we have. But this is the one she is known for. This is the one written about her. This was her moment.

Esther is a fairly short book of the bible. Spend some days going through it. It is a compilation of history and human actions, but spending time in it will illuminate situations not unlike our world today. And hopefully God will use it to bring out your own confidence in his plan for your life.

What stage are you in? Are you submersed in the dormant stage? Waiting endless seasons. Motionless. Seemingly purposeless. Not knowing if you will ever feel that push from God again?

Or are you blooming now? Expending great energy over too short a period of time for what you know to be God’s hand in your life. Enduring through transitions, stress, great expectations and pressure to succeed.

Or are you somewhere in between? Feeling the dormant stage starting to thaw. The winds are moving. Change is laying expectantly just around the corners. Your time is coming.

No matter what state you reside in, the Lord is orchestrating it all. Each stage is useful to his purpose. Each moment of obedience bringing glory to his name. Search for his direction for this season and remain confident in his timing for your life.