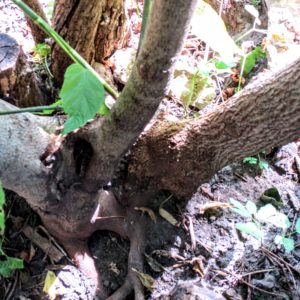 In our backyard is a tree made up of three different types of trees. All three grow from the same conjoined trunk at the base. There is an oak tree, a maple tree and lilac bush that is so large it may as well be a tree. All three are thriving together. Maple and oak trees are native to our driftless area, but lilacs are not. Lilacs do not originate from Western Wisconsin. They originated from the European Balkan countries and made their way over to us on trade routes in the 1500s. They are strong and hardy plants that can outlast many tree varieties of our area, living for 100s of years. Because they don’t originate from here and they last so long, it is interesting to notice that whenever a grove of lilacs grow, we know at some point someone planted one there. There was human contact with that portion of the earth. Someone found that place home enough to plant these beauties. Their strength and adaptation abilities allow them to thrive in an area they did not originate from. They neither dominate the area and become an invasive species, nor do they allow themselves to get trampled out by other native species. They simply thrive right where they are planted and coexist with their surroundings.

It is impossible to know which of our trees started first, short of cutting each down. Which one joined the other and let the third join them? All we know is that at a very young age, each decided to coexist. Instead of forcing the other species out, or refusing to let it thrive, they intertwined their root systems, gather sunlight together, and grow together every year. Every year, all three make new buds, new branches, and reach a little deeper into the earth. All three not only survive, but thrive.

Taking a snapshot of the nation we live in now, I see far more of the latter than the former. Middle eastern conflicts arise between our truth and lie driven culture and their shame and honor driven culture. North Korean conflict driven by a power of wills. Our own internal conflict against each other out of our own ignorance of our own countrymen when it comes to racism and citizenship. All the while assuming our own people are some sort of ‘other’ to us.

Our anger is stirred when someone else, one of the ‘others’, deems themselves superior to us, and insists on our surrender to them. They demand recognition of cultural superiority, advanced technology, or admission of guilt for oppression at the hands of those that came before us. In return we express not just our independence from, but our superiority to them. The fight continues, and nobody wins. If we insist we are better than another by any human measure; wealth, technology, military, moral standing, religious adherence, cultural practices, or any other; how are we any different from them? Is that not the exact complaint they have against us? We are so busy trying to prove we are not what they say we are, while behaving in exactly the same way we demonize them for behaving. Where does it stop?

There are a number of biographies from survivors of the Holocaust. In each and every story there is one common thread apart from the commonality of suffering. Compassion. The only reason any survivor made it to survival was because at some point along the way someone issued a moment of compassion on them. Food at a time of great illness (Corrie Ten Boom), escape at a time of foreboding death (Dietrich Bonhoeffer, later martyred for the faith, but survived the war itself), a Catholic hospital willing to hide a Jewish baby (Jeannine Burk), shop owners willing to buy Jewish goods at inflated prices just to support Jewish families (Shep Zitler), false papers with a false name to work undercover in Germany until the end of the war (Eva Galler). Their humanity was valued when they showed themselves capable of seeing their ‘other’ as another suffering soul that also only wanted the war to end. In each story, somewhere along the way, each side stopped viewing the other side as ‘other’, and saw in their midst another valued life in humanity. For even a moment, they decided to coexist. To share the same root system, rather than steal from the other. To allow the other to survive, even if it meant living with less themselves. In each instance, it proved a pivotal moment for the survivor’s life, and every person that was touched by that life from that point forward.

When do these wars stop? When compassion is allowed to survive. Whether we are native, or transplanted, we can share the same root system. We do not have to force one or the other to conform to us in order for ourselves, our way of life, our religion, or our culture to survive. We need only to allow the ‘other’ the same respect we demand from them. To listen before we demand to be listened too. To try and understand before we insult them with our misunderstandings. That’s when hatred stops. That’s when compassion begins. And that’s how we all survive.

This letter from Paul to the believers of Colosse illuminates exactly where we can start to rework our hearts to one of inclusion rather than exclusion. By acknowledging that we are all sinners, all saved by Christ alone and not by our own works. When we see another person as another imperfect temple for the Holy Spirit, it starts to become easier to find common ground. Verse 15 brings it all together “And let the peace that comes from Christ rule in your hearts. For as members of one body you are all called to live in peace. And always be thankful.”

Who do you view as ‘other’? What makes them different from you?

What makes them similar?

How can you see yourself in their situation? What hopes would you have for yourself and those you love in that situation?

How can you begin to bridge the gap between you and them? How can you allow them to survive and thrive, while still maintaining your stance? How can you share root systems?